The first image below shows that a large portion of the world’s microwork carried out through ODesk is carried out in Asia: particular in the Philippines, Bangladesh, India, and Pakistan. At noon (local time) on an average Tuesday, there are almost 35,000 active workers on the platform, roughly one third of whom are located in India, about one quarter in the Philippines, and about one tenth in the United States. Russia and the Ukraine also each provide over five percent of the total. Despite the fact that ODesk is used in 58 countries that cover almost every time zone, 85% of the digitally mediated workers are located in the seven countries mentioned above. In other words, despite the potential for almost anyone with an Internet connection to become a microworker, we can see that microwork practices have very clustered geographies. 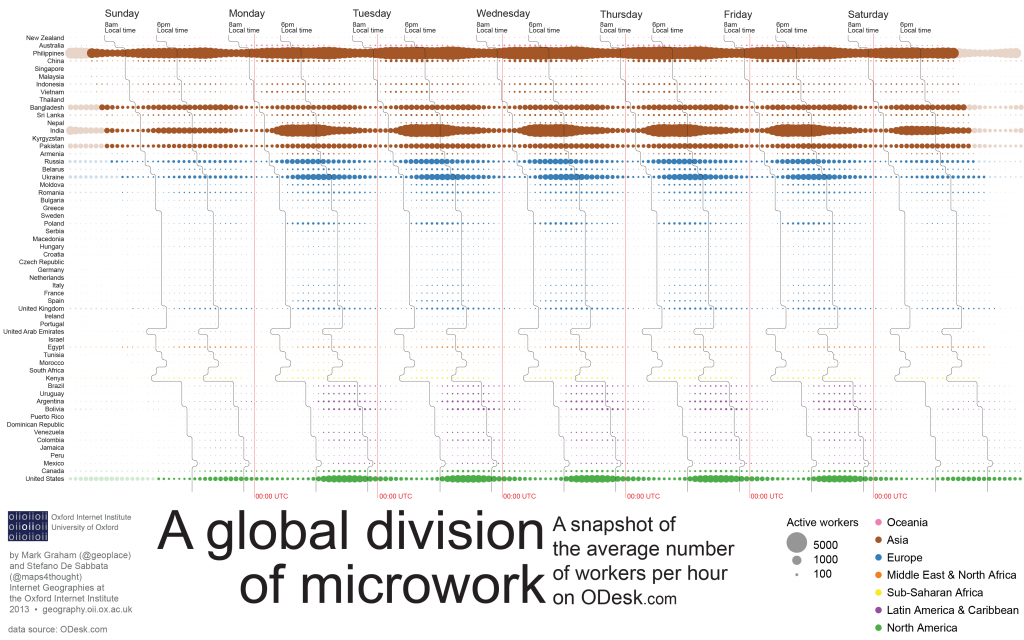 One interesting facet of these data is the significant different between working patterns in the Philippines and most other countries. In most countries, it is easy to distinguish the difference between day and night by the sharp drop-off in work that happens at the end of the working day. However when looking at the Philippines we only see a relatively minor change in working practices between the day and night.

In many countries we also see a stark difference between weekdays and weekends. However, the Philippines again exhibit a relatively consistent temporal pattern with fewer people than elsewhere avoiding work on weekends. By 3am (Philippines time) on an average Sunday morning, the Philippines provide almost half of the active workers in ODesk.

Some of these patterns can be traced to the large US demand for microwork. Filipino microworkers are mostly employed to complete tasks related to data entry, writing, and a variety of personal assistance work(see ODesk Philippines Country Dashboard). We see an increase in the number of active Filipino workers when it is morning in the US (9am Eastern Standard Time: which is 10pm in the Philippines). Bangladesh also exhibits a similar pattern to the Philippines. Bangladeshi microworkers are also largely employed for data entry, with the most common type of task performed in the country relating to search engine optimization (see ODesk Bangladesh Country Dashboard).This contrasts to the situation in India, where most microworkers are employed for tasks related to Web programming and design (see ODesk India Country Dashboard). In India, we see the number of active workers decline in the US morning (9am Eastern Standard Time: which is 6.30pm Indian time).

The second image, weights the number of active microworkers from each country against that country’s Internet population. This gives us further insights into some of the country-specific differences in microwork practices. For instance, we can see that not only does ODesk have a large and around-the-clock workforce in the Philippines, but that the platform is also relatively popular in that country. On an average Tuesday at noon local time, ODesk employs 0.025% of the entire Filipino Internet population. This is almost ten times the global average. By way of comparison, the platform employs only 0.001% of the US Internet population. 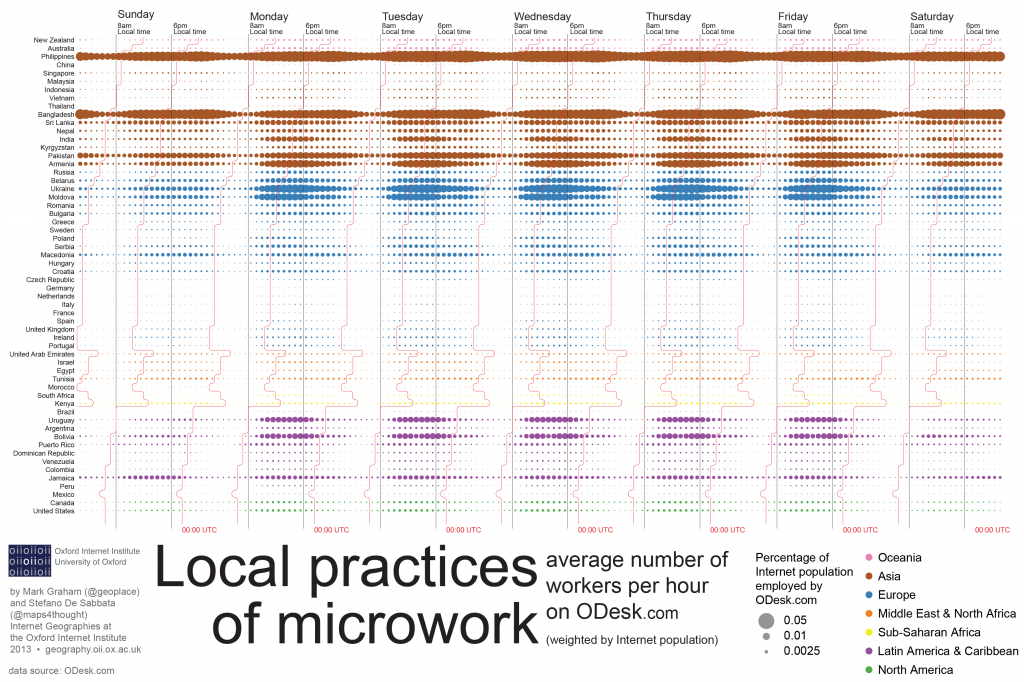 Online microwork also appears to be relatively popular in Armenia and Moldova (in both countries over 0.01% of the Internet population are active on an average Tuesday at lunch time), mostly employing micoworkers in the fields of Web programming and design. In South America, Uruguay and Bolivia also demonstrate relatively high rates of microwork activity; Bolivia is particularly interesting because it is the only country that exhibits a visible decline in the number of active workers in the middle of the working day.

These data offer a fascinating insight into new practices of work in our global knowledge economy. The ability to carve up large projects into small digital tasks that can be performed by a globally distributed labour force has meant that global demands for, and supply of, digital tasks can be easily matched. But it remains to be seen whether these new work practices are a useful employment opportunity for many of the two and a half billion connected people in the world, or whether they represent a new type of digital sweatshop in which the world’s poor are enrolled, as expendable and unorganized workers, into exploitative digital divisions of labour.

Microwork refers to a series of relatively small tasks that are carried out by a distributed workforce over the Internet. Practices of coordinated microwork therefore allows for relatively large projects to be carried out quickly by workforces from around the world. ODesk is one of the largest job marketplaces for microworkers. This graphic uses openly available data from ODesk, describing the hourly working practices of microworkers (i.e., the number of active workers per each hour of the week) in each country across the globe.

In the first visualisation, each dot represents the average number of workers active in each country for every hour of the week. For countries that span more than one time zone, we use the local time in the capital city.

The second visualisation uses the same data, but makes two changes. First, dots are aligned according to local time, rather than Coordinated Universal Time (UTC). Second, dots are aligned according to UTC  and the size of each dot is normalized by the Internet population in each country. These changes offer a sense of how prevalent online microwork is in each country, and allows working hours between places to be directly compared.

The representations do not account for the use of daylight saving time.