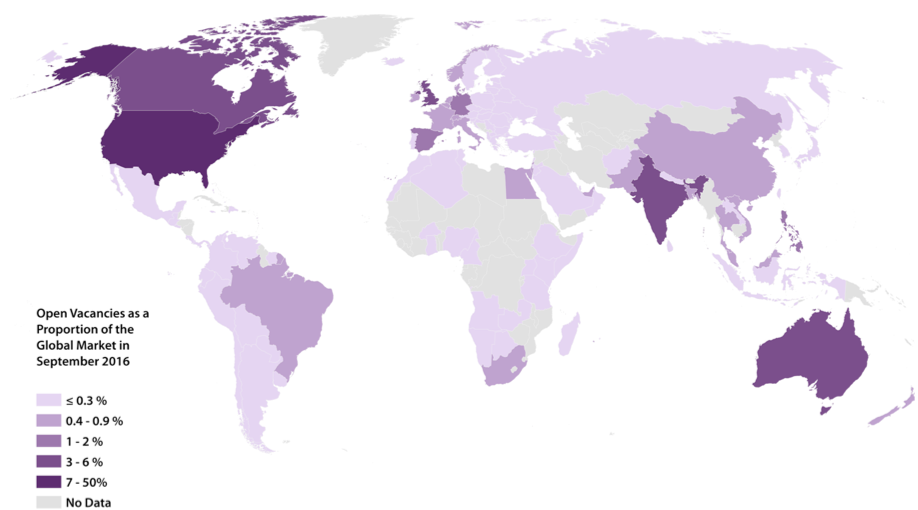 Amir Anwar and I have a new article out in First Monday. The piece think through what a planetary labour market entails, how it is relationally, spatially, and discursively constructed, and who it benefits. I’m pasting the abstract and conclusions below.

We are witnessing the emergence of a ‘planetary labour market’ for digital work. Building on a five-year study of digital work in some of the world’s economic margins, we show a planetary labour market does not do away with geography, it rather exists to take advantage of it. Digital technologies have been deployed in order to bring into being a labour market that can operate at a planetary scale, and has particular affordances and limitations that rarely bolster both the structural and associational power of workers.

Following the call by Strauss [18] for “sustained critical attention to what is distinctly spatial about the processes that are of interest, how place matters to those processes, and how scale is relationally constructed […] and experienced in the production of precarious work situations,” this article has explored the ways in which inequality is structured into online labour markets when they are scaled up to the planetary level. We have seen, following Fevre (1992), that employers can learn about workers, workers learn about jobs, both parties learn about each other, and transactions take place in ways that seemingly ignore some of the traditional limitations of time and distance. Employers and workers, through the affordances of digital technologies, can seek each out a genuinely world-spanning scale, escaping some of the constraints that previously bound them exclusively to their local labour markets. Most importantly, many previously bounded labour markets were both transactionally and discursively insulated from a global reserve army of labour and the downward pressure on wages and working conditions that it brings about (Huws, 2003) [19]. A market that is planetary in scale will cease to have any of those brakes on the erosion of working conditions. Yet, while all of these interactions occur between economic actors in different parts of the world from one another, what we see is not just Hardy’s hiring fair scaled-up to a global-level or scaled-down onto the head of a pin. Instead of seeing the space of the labour market through a Euclidean lens in which geography is a pre-existing canvas on which economic relationships can be formed, the spaces of labour markets are instead relational and emergent.

It is this understanding of space that we seek to bring to discussions about digital work. The discussion in this paper should encourage us to move away from thinking about labour markets as bounded spaces that you could draw on a map. In a planetary labour market, everything does not happen everywhere. But, key spatial constraints (e.g., the need for commuting, to leave the house, and to obtain visas and permits) can be circumvented. This forces us not to imagine away the always-existing economic geographies of work, but to ask questions about how they will shape and be shaped by the potentials for planetary-scale interactions.

Thomas Friedman [20] famously pointed to a globalized world that would allow for “the sharing of knowledge and work — in real time, without regard to geography, distance, or, in the near future, even language.” But, as much as some firms and clients might want it to, a planetary market doesn’t do away with geography; it rather exists to take advantage of it. Platforms use uneven geographies to facilitate labour arbitrage, cross-border competition, and are able to foster what Peck [21] refers to as an ‘offshore consciousness.’ To be clear, references to local labour markets, national labour markets, and planetary labour markets should never be made to ignore the myriad ways that those labour markets are brought into being by multi-scalar exogenous factors which, in turn, lead them to be socially and spatially segmented and fragmented. The spatial and scalar prefixes (urban–, local–, national–, etc.) that we add to labour markets instead are intended to signify enablers and constraints that serve to cluster a convergence of employers and workers within particular economic geographies. These enablers and constraints can be technological barriers (e.g., transportation costs and the availability of broadband), political (e.g., the availability of visas and work permits), social (e.g., availability of skills and language fluencies), economic (e.g., local reserve wages) and spatial (e.g., work and workers that inherently have to be in particular places).

Underlying material economic geographies of workers and clients are therefore never fully transcended, work is never fully commoditised, and there remain national and regional practices and institutions which govern the purchase, sale, and pricing of labor on platforms. But none of those national and regional practices determine the shape of the market as a whole. This is not to say that labour markets in non-digital contexts do not have similar ways of empowering and disempowering different groups. The material architectures, norms, laws, and relationships in traditional labour markets all bring particular power dynamics into being. However, what is different in the digital context is that co-presence and the transitory proximity that platforms bring into being is illusory. While workers can, in theory, connect from anywhere, they lose the ability to control a key part of their agency that they otherwise have in any other context: their control over space, and their ability to bring into being labour geographies that are at least in part on their own terms (see e.g., Herod, 2001). Because employers and workers have significantly different abilities to control space, the planetary labour market is a context that serves to further undermine the structural power of labour vis-à-vis that of capital.

This manifests in six key ways. First, mass global connectivity is bringing onstream a massive oversupply of labour power, mainly from lower-income segments of the world population. There are far fewer digital jobs than there are people able and willing to do them. The ‘elemental rationale’ of offshoring has always been to cut and supress costs [22], it should therefore come as no surprises that online outsourcing continues the trend. Second, many workers seeking jobs in a planetary labour market are replaceable and interchangeable. This is not just due to the oversupply of labour power, but also to the fact that production networks can be footloose while workers are tethered to place. Third, workers mostly interact as competitors rather than collaborators. For digital workers, this situation arises primarily because there are few physical sites at which to assemble with co-workers and because the highly commodified nature of their jobs can lead to competition on price above all else. Digital platforms deliberately limit the amount of horizontal information that workers can glean about one another, and the distributed nature of work means that workers have few opportunities to engage in collective action afforded by spatial proximity. Fourth, there is a lack of transparency. Although workers can use digital tools to find jobs on the other side of the planet, the networks and platforms used to mediate those jobs can also conceal much about the nature of those activities. In other words, workers often know little about the production networks that they are embedded into and are offered few opportunities to economically upgrade skills or value chain positions. Fifth, there is a relative lack of agencyamongst workers to have their voice in, or shape, their labour conditions. The affordances of most types of digital work tend to be closed to workers- in part because workers rarely have any stake or control in the physical or digital means of production in the digital economy. If we extend spatial metaphors to online labour platforms, they are not public markets; they are rather private spaces. Finally, workers tend not to be protected by labour laws. Because the labour market extends well beyond any individual jurisdiction’s ability to regulate it, self-regulation tends to be carried out by platforms and clients. Labour laws that exist to protect workers are ignored in some cases, sometimes even wilfully.

These issues amplify each other, and all serve to undermine the structural power of workers. And they are all possible because of the specific designs of planetary labour markets that use space against workers. The issues outlined in this paper paint a picture of a grim future for the balance of power between labour and capital that is likely unsatisfactory to anyone who doesn’t run an outsourcing company. But what can be done if we want to envision and see more equitable outcomes? The solution cannot simply be to turn our backs on innovations in information and communication technologies. We can likely never go back to a world only characterised by local labour markets.

Despite the concerns presented here [23], the digitally mediated relationships presented in this article are far from inevitable. There are two primary reasons why we believe this to be the case. First, all of the digital and virtual infrastructure deployed to bring a planetary labour market into being ultimately depends on material infrastructures, organisations grounded in physical places, and real-world regulation. Current configurations of infrastructure and regulation are thus far from inevitable. Interventions such as platform cooperatives, attempts at cross-border regulation, and horizontal organising amongst workers are more effectively covered elsewhere (Graham and Anwar, 2018; Graham and Woodcock, 2018; Irani and Silberman, 2013; Wood, Lehdonvirta, et al., 2018), but the simple point here is that by understanding the spatialities and temporalities of contemporary labour markets, we can better shape them. We can no longer think about labour markets for digital work as being simple shapes on a map.

Second, the ways in which technologies are deployed to produce specific time-spaces and not others do not dictate how we necessarily use, produce, or jump-over geographies. Indeed, code and algorithms co-produce spaces that are often malleable and hackable (Zook and Graham, 2018). Workers and their advocates have thus far certainly found ways of using technological infrastructures in unintended ways that work in their favour (Wood, Lehdonvirta, et al., 2018), and we will need more of this if workers are to exert any significant amount of agency in the labour process. But to build or perform alternatives, we again need to base our efforts on realistic understandings of the relationships between economic actors, technologies, and the spaces they bring into being. In Hardy’s hiring fair, we wouldn’t expect workers to be able to collectively bargain or form a picket if they misread the opportunities and constraints provided by their spatial proximities.

This paper ultimately builds on Doreen Massey’s (1994) ‘global sense of place’ — a sense of how distant people, places, and processes are always inherently enrolled into any local relationships. We do that by showing that we can use five characteristics of labour markets to think about how online labour platforms create labour markets that are planetary in scope. It has also shown some of the ways in which constructing a planetary labour market changes the balance of power between labour and capital. We have demonstrated not that geography has been eliminated, nor that places have been made irrelevant. No virtual space has been created allowing employers and workers to co-exist beyond the confines of the physical realm. Rather what has happened is that digital technologies have been deployed in order to bring into being a labour market that can operate at a planetary scale, and has particular affordances and limitations that rarely bolster both the structural and associational power of workers. Digital technologies that underpin online labour markets help clients operate unboundedly and trans-spatially, and allow them to reconfigure the geography of their production networks for almost zero cost. Workers meanwhile can sell their labour power globally, but still are tethered to the locales in which they go to bed every night.