Submarine telecommunications have come a long way since 1842, when Samuel Morse sent the first submarine telegraph transmission under the waters of New York Harbor. Today, an entire network of fibre-optic cables connects almost every corner of the world, enabling the hyper-connected world that many of us take for granted. 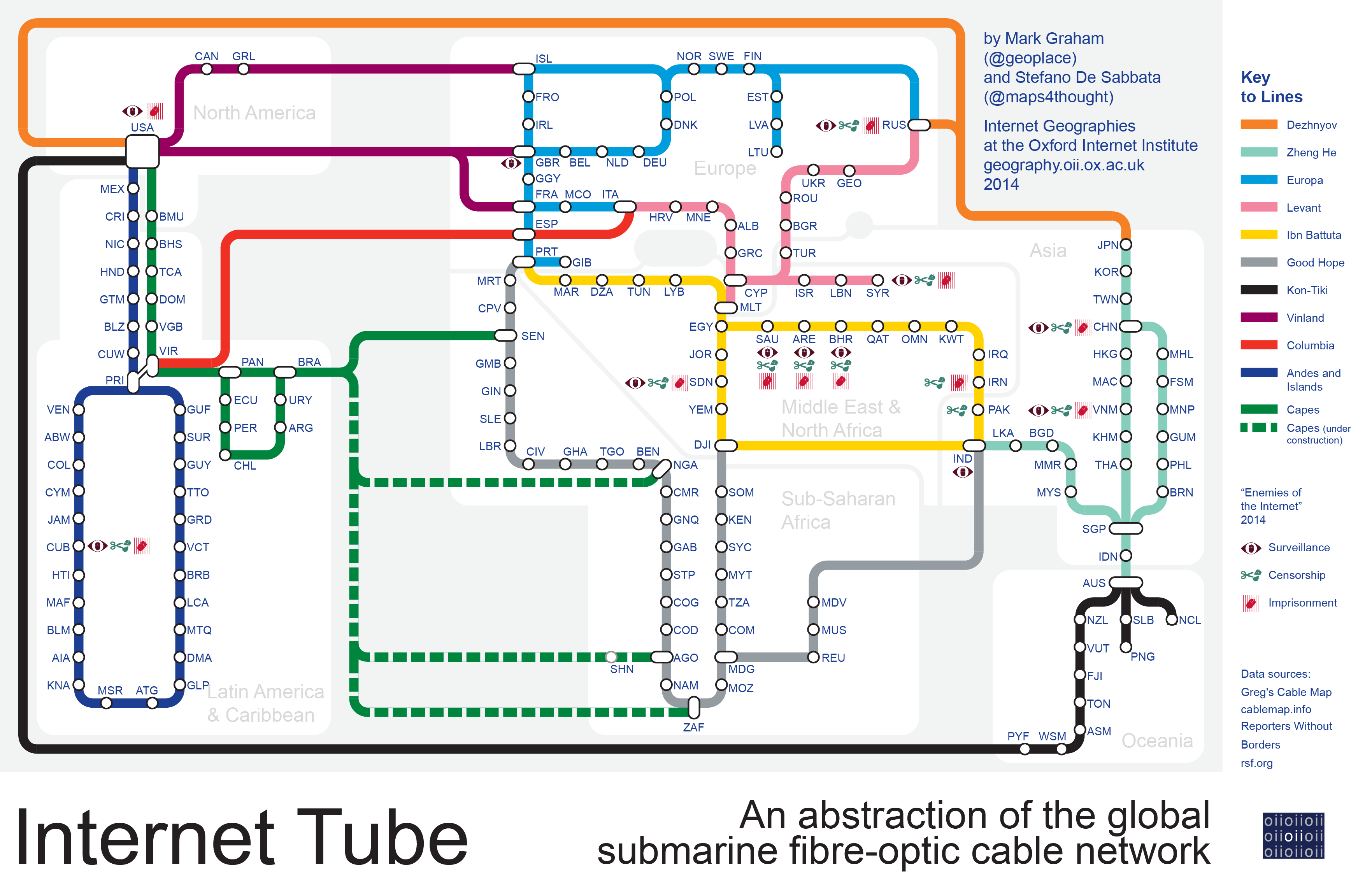 The United States is by far the most connected country in the world, with submarine cable landing points on both coasts that connect it to most other continents. On the other side of the Atlantic, are the second and third most central parts the global network: the United Kingdom and Senegal. The UK has been a pioneer in laying submarine cables since the second half of the nineteenth century, and still controlled almost half of the world’s submarine cables in the 1920s.

Looking at the network at a more fine-grained scale, Alexandria (Egypt) is the world’s most central node, immediately followed by Singapore and Fujairah (United Arab Emirates). The city of Fortaleza in Brazil and the town of Bude in Cornwall (United Kingdom) are the most central single points in Latin America and Europe respectively, and Accra (Ghana) dominates the Sub-Saharan African list.

The importance of being central in the submarine fibre-optic cable network is twofold. On the one hand, Internet users in central countries tend to have faster and cheaper connections to the Internet — there are no countries with low-cost Internet access that aren’t also relatively well-connected.

But we’ve also seen how certain central countries in the network have a history of engaging in surveillance of Internet traffic: as revealed by Edward Snowden and described by the Guardian and the Washington Post, for both internal and foreign surveillance. For instance, in its “Enemies of the Internet 2014”, Reporters Without Borders highlights how several British telecommunication companies “have made their infrastructure available to GCHQ, allowing it to place hundreds of wiretaps in submarine cable landing stations”. From this perspective, we also see the potential dark side of network centrality.

The map uses data sourced from cablemap.info. Each node has been assigned to a country, and all nodes located in the same country have been collapsed into a single node. The resulting network has been then abstracted.

For the sake of simplicity, many short links have been excluded from the visualization. For instance, it doesn’t show the intricate network of cables under the waters of the Gulf of Mexico, the South and East China Sea, the North Sea, and the Mediterranean Sea. The map instead aims to provide a global overview of the network, and a general sense of how information traverses our planet. (The findings reported below, however, are based on two analysis of the full submarine fibre-optic cable network, and not just the simplified representation shown in the illustration.)

The map also includes symbols referring to countries listed as “Enemies of the Internet” in the 2014 report of Reporters Without Borders. The centrality of the nodes within the network has been calculated using the PageRank algorithm. The rank is important as it highlights those geographical places where the network is most influenced by power (e.g., potential data surveillance) and weakness (e.g., potential service disruption).