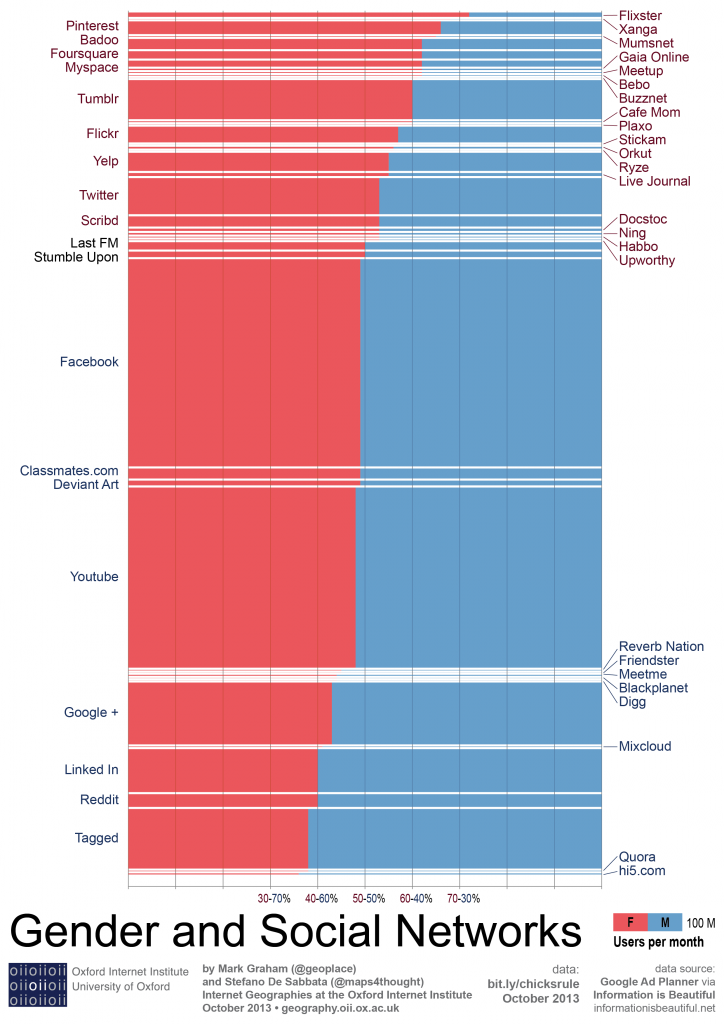 On the whole there isn’t a large disparity between men and women on the social networks represented here. The data indicate a total ratio of 1.05 males to every female.

This more-or-less equal gender balance can be seen in the two largest social platforms, Facebook and YouTube, whose gender ratios are very close to the ratio in the general population (however, both do see slightly more male than female users).

It is interesting to note that, despite the fact that we see a slightly higher overall male participation rate, we actually see a greater number of platforms that have a higher ratio of women to men. For instance, both Flickr and Tumblr have a ratio of over 55% female users. A similar ratio can be observed in the Google-owned social network Orkut, which is popular in Brazil and India. Meetup, which is one of the largest networks to facilitate group meetings, also has a predominantly female population, with only 38% male users. Foursquare and Myspace both have fewer than 40% male users, and the movie discovery website Flixster, has more than 70% female users.

On the other end of the chart, the largest professional social network LinkedIn has only 40% of its accounts owned by female users. The social news and entertainment website Reddit has a similar balance. The population of the social discovery website Tagged is also highly skewed towards male users, as males account for over 60% of the user base. Finally, the social networking and gaming platform Hi5 registers a mere 36% female users.

As the Internet becomes available to billions of new people in the next few years, it will be important to keep a focus on how these statistics evolve. Will we start to see more gendered silos of use or more balanced platforms of participation?

The graphic uses 2013 social network statistics (not publicly available at the time of writing, as being updated) collected via the Google Display Planner tool by Information is beautiful, who have also published a visualisation (using 2012 data) of the gender balance in social networks.