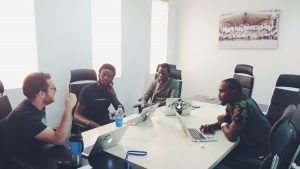 The ‘techie’ archetype is the mascot of our age. Generally imagined and depicted as a youth, most often male, wearing a casual sweat-shirt, and carrying a backpack that contains the tool of his trade—the laptop. The techie dreams of building a software ‘app’ that commands a global following and so ingenious that wealthy investors line up for an opportunity to bankroll it. At the macro-scale, the archetype is cast in a narrative where ‘start-up’ environments inhabited by techies are the economic engines of the present and the future. As a result, any government worth its salt is concerned with establishing this ‘ecosystem’, often modelled on the ultimate exemplar, Silicon Valley. These tropes and ideal types belie the variety of actors and forms of digital entrepreneurship that exist around the world.

The digital entrepreneurship imaginary, for one thing, has a wide reach because it is transmitted by the relatively ubiquitous technologies with which it is associated. Information technology, is also accessible in a different way. Its knowledge, talent and material requirements do not require the heavy investments of other ‘start-up’ generating counterparts like ‘biotech’ or ‘clean tech’. As a result, there is a belief that in this cosmopolitan world of bit and bytes that the ‘next Facebook or Google’ can come from any place and that the digitital realm represents opportunities for everyone, independent of where they are located geographically. ‘Does this belief hold water?’ is an underlying question of my research. ‘How do Silicon Savannah’s arenas of expectation interact with global structures of innovation and entrepreneurship?’ is how it is framed in my thesis.The aim of my research was to consider how a variety of  ‘techpreneurs’  in Nairobi, Kenya envision success and whether those imaginaries and narratives are aligned with empirical reality as evidenced in their practices and outcomes. In a world where the successful are called unicorns, fantasies almost seem inevitable. What are actors willing to do in order to keep the dream alive? I have found that the expectations and imperatives that have developed around the technology start-up concept often lead to unexpected or perverse outcomes as firms enact what they think (or are taught) success looks like.

Interest in these topics stem from a previous life, when I worked for a US-based, science organisation that advised governments and corporations about how to ‘do’ innovation. We aimed to facilitate desirable outcomes such as the adoption of ‘clean’ technologies; a shift towards greener, smarter cities, and the development of vaccines for neglected and rare diseases. Armed with the knowledge of various frameworks such as Etzkowitz and Leydesdorff’s Triple Helix, the OECD’s Freeman and Lundvall inspired Oslo Manual, Stokes’s Pascal’s Quadrant, etc. we conducted extensive research into the ways the cases under our remit differed from the ideal. The advice was always aimed at retro-fitting the context to fit the framework. I always felt that we were not giving full respect to the intractability of contingent factors such as history, place and culture. It seemed to me that they were much more durable, and may be even held more potential, than we could consider given our approach. Meanwhile, in my home town of Nairobi, an emergent digital innovation economy seemed to be providing a case-in-point—it had originated under ‘scarcity’ conditions and without the interventions and inputs that we often regarded as prerequisites.

Maybe university-industry linkages were not that important. What if dedicating percentages of GDP to R&D and education in STEM was not a requirement? Then again, perhaps, it was the nature and affordances of digital technologies that had facilitated these organic developments. It could also have been that despite all the hype, Silicon Savannah did not really represent a working exemple of innovation entrepreneurship and was just part of the ‘Africa rising’ media narrative that was in vogue. These musings seemed more at home in an academic setting, which led me to enrol in the Science and Technology Studies program at the University of Edinburgh. Using Biography of Artefacts and Practices’ approach, I traced the history of the ICT industry in Kenya from deregulation and liberalisation in the nineties, to present day Silicon Savannah. A year of fieldwork produced ethnographies of two technology firms, different as night and day, as they navigated towards ‘exit’ and/or profit. Interview data was supplemented by digital archives of blogs, emails and social media in an attempt to capture how and why respondent’s perspectives and practices changed over time.

Geonet’s longitudinal comparison of digital entrepreneurship in several African cities, represents an opportunity to expand this inquiry. I am eager to understand how contingent factors interact over time to produce a variety of scenarios, different from the ones that I am familiar with. I will be involved in developing these explanations based on comparative analysis of the close and distant case studies that we will be building. Evaluating how digital entrepreneurship manifests and is facilitated, in a breadth of places and spaces, supports institutions tasked with making choices about how to best support the generation of digital livelihoods and technologies. It enables them to think beyond replicating the archetype.